Have you ever had an Orange Julius? Well, this Orange Creamsicle Smoothie tastes exactly like an Orange Julius. And it has those delicious creamy orange and vanilla cream vibes you expect with an orange creamsicle, but it’s healthy!

It’s hard to find an orange creamsicle smoothie without yogurt, so I created one of my own! Here’s a little background on the origin of this particular smoothie. Growing up, whenever I would go to the mall with my dad, we would get a bag of warm cashews and an Orange Julius. Then they became hard to find, so I tried over and over again for many many years to create the perfect Orange Julius copycat recipe. My youngest sister and I came very close a few times, but our creation was loaded with sugar and not something I wanted to indulge in day in and day out. So it was reserved for rare occasions when I had a craving. But now, I can drink one every day if I want to and know that it’s contributing to my overall health instead of taking away from it! And I just have to share this delicious Orange Creamsicle Smoothie with all of you!

Orange and vanilla together is one of the best flavor combinations out there. It’s like the refreshing fruity version of chocolate and peanut butter!

This Orange Creamsicle Smoothie is made with 6 simple ingredients that are healthy! But there are other ways to make it as well, so I’m going to give you a couple of different options based on the type of protein powders you have on hand.

What ingredients you need to make this Orange Creamsicle Smoothie:

When I make this Orange Creamsicle Smoothie for my kiddo, I leave out the peptides, and use the cauliflower rice instead of ice cubes. It’s a great way to get him to “eat” veggies because he doesn’t even realize I’ve snuck them in. He just thinks I’ve made him an orange milkshake, so I roll with that!

Milk: You can use any milk you want for this recipe. I prefer unsweetened almond milk for most of my smoothies, but coconut milk is good too. Coconut milk will add a coconut flavor to this recipe, so keep that in mind.

Frozen Riced Cauliflower: you can use ice cubes if you want, but frozen cauliflower rice adds a little creaminess to this Orange Creamsicle smoothie recipe, and the flavor is masked by the orange juice and vanilla extract.

Vanilla Extract: DO NOT SKIP this ingredient!!! Seriously, it’s what gives this orange and vanilla smoothie it’s vanilla flavor!

Maple syrup: maple syrup is my go-to sweetener for smoothies, but stevia is a great alternative.

Collagen peptides: peptides are optional in this orange and vanilla smoothie recipe, but they do add quite a bit of protein, and when blended, peptides become frothy. So I suggest giving them a try if you have some on hand!

What ingredients you need to make an Orange and Vanilla Protein Shake:

How to make this Orange Creamsicle Smoothie:

If you make this smoothie and love it as much as I do, please let me know! I absolutely love getting feedback about my recipes, especially ones I’ve worked 20 years to perfect!

A few of my other favorite smoothie recipes:

*Affiliate link “As an Amazon Associate I earn from qualifying purchases.* 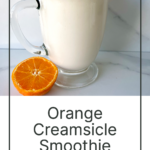 Servings: 1 smoothie
Calories: 239kcal
Have you ever had an Orange Julius? Well, this Orange Creamsicle Smoothie tastes exactly like an Orange Julius. And it has those delicious creamy orange and vanilla cream vibes you expect with an orange creamsicle, but it’s healthy!
Print Recipe

*Affiliate link “As an Amazon Associate I earn from qualifying purchases.*

Shortcuts are always welcome in my kitchen!

Hey y'all, I'm Jess and serving up delicious recipes your whole family will enjoy is my passion! So if you like taking shortcuts in the kitchen to produce easy delicious gluten free meals, you're in the right place!