My hubby was scrolling through his Facebook feed over the weekend and happened upon a picture someone had posted of a breakfast pizza. He showed it to me and I instantly knew I was going to recreate it and make it gluten free! Monday couldn’t get here fast enough! We walked to the grocery store and picked up a box of pre-made frozen cauliflower pizza crusts, turkey breakfast sausage, eggs, and shredded cheddar cheese. The rest of the ingredients were waiting at home for us, including salt, pepper, milk, and gluten free flour.

Breakfast for dinner is a cult classic, and this meal puts a new spin on it! I preheated the oven to 425 degrees and browned the sausage in a large skillet. Once the sausage was cooked through, I added in 2 tablespoons of butter and ⅓ cup gluten free Kentucky Kernel flour. This flour is by far my favorite for making gravies because it is seasoned to perfection! I was so excited to find they make a gluten free version of the flour my momma has used for years and years!Once those ingredients were mixed together, I added in some salt and black pepper and slowly stirred in 2 and a half cups of 2% milk, a half cup at a time. The gravy thickens up quickly and packs all of the flavors of traditional sausage gravy. My hubby was blown away by the taste and couldn’t believe it was gluten free!

While the gravy sat awaiting it’s new role as pizza sauce, I scrambled 8 large eggs in a separate large skillet. I never use butter or grease to scramble my eggs. Instead, I lightly coat the skillet with spray avocado oil to prevent the eggs from sticking and stir them with a wooden spoon to keep them fluffy. While the eggs were cooking, I slid the two pizza crusts into the oven for 10 minutes to pre-cook. After the 10 minutes, I placed them on a baking rack on my counter and began to assemble the breakfast pizzas. Green Giant and Caulipower make delicious gluten free cauliflower pizza crusts, and for this meal I chose the Green Giant ones. They come in a two-pack, which is good because they are quite small at about 6-8 inches in diameter.

I split the gravy and eggs equally over the crusts and topped each with ½ cup of shredded sharp cheddar cheese. Then I slid the baking rack with the assembled pizzas back into the oven for about 5 minutes, until the cheese had melted. I was FaceTiming with my dad when I pulled the pizzas out of the oven and he stayed on the phone to find out if they tasted as good as they looked…they did! He told my mom about the breakfast pizzas and it was decided that I’m making them for my entire family when I visit next month! Good food has a way of bringing families together, and I love that I can share my love for food with the people I love. What’s even better is that they know I can’t have gluten but they never question whether the foods I’m making for them are gluten free. Eliminating gluten doesn’t mean you have to compromise on flavor, and all of my recipes and recommendations are proof of that!

Flour: While I used Kentucky Kernel gluten free flour for this gravy, I have made gravy in the past using King Arthur gluten free flour. If you use an unseasoned flour, like King Arthur, use the full teaspoon of black pepper. I have not tried making gravy with almond flour.

Milk: I keep 2% milk on hand for my toddler, so that’s what I used for the gravy, but you could easily use any milk you have on hand, including almond milk. If using almond milk, add it in a ½ cup at a time because it’s a little thinner than cow’s milk and you may need less of it.

Eggs: If you’re looking to lower the fat or cholesterol content, scramble 2 whole eggs with 10 egg whites to keep all of the flavor of traditional scrambled eggs.

Low Carb/Keto: For a low carb option, you can find a recipe for keto gravy that uses cream cheese as a thickener instead of flour, and you can use my low carb pizza crust instead of pre-made cauliflower crust.

Sausage: If a home cooked meal sounds good to you but you lack the time to put in the extra effort, pre-cooked sausage crumbles, links, or patties, can be used to make the gravy. If using links or patties, chop them into tiny pieces and add them to the skillet before adding in the butter and flour. It still packs the same flavors!

If you follow a carb cycling scheduling, this meal is perfect for a moderate carb day! 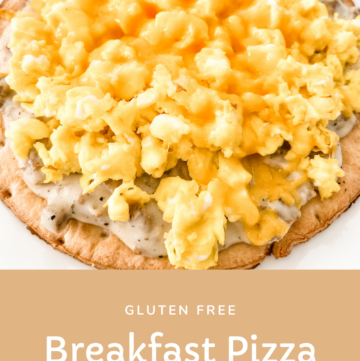 Shortcuts are always welcome in my kitchen!

Hey y'all, I'm Jess and serving up delicious recipes your whole family will enjoy is my passion! So if you like taking shortcuts in the kitchen to produce easy delicious gluten free meals, you're in the right place!